Surveys show the top three challenges facing medical IT departments with regard to data storage are:

According to one report, in 2014 the volume of healthcare data was 153 Exabytes. It is projected to explode to 2,400 Exabytes by 2020. Many hospitals, radiology clinics, and other entities that produce large amounts of medical imaging are scrambling to find efficient and cost effective storage strategies to cope with this massive increase in data.

These technologies were improvements, but problems still existed. Different vendors created their own implementations, and many of these implementations used proprietary hardware and software and were not open systems. This locked users into a particular vendor’s hardware. Given the rapid pace of changing technology, being locked into a hardware solution is a real problem. It is a fact of life that something newer, faster, and better will debut in the very near future. Consider a state-of-the-art purchase just a few years ago – it would have included tape drives, optical jukeboxes, and other hardware that were made obsolete by advances in technology in a very short time frame. Rapid and continuing advances in storage technology means that adopting newer, faster, and more reliable hardware is not a nicety, but rather a certainty. Being locked into specific hardware means it will be difficult, if not impossible to take advantage of advances in technology without abandoning the existing system and opting for the dreaded “forklift upgrade”.

Enter the Vendor Neutral Archive (VNA). The definition of a VNA is “a medical device that stores medical images in a standard format with a standard interface, such that they can be accessed in a vendor-neutral manner by other systems”. A true VNA will eliminate a number of barriers for medical imaging and medical IT professionals. It will remove barriers to sharing information between different vendor implementations of medical data creation, sharing and storage. It means that facilities using different vendors’ hardware can still share medical information, and it means that as storage technologies evolve, medical IT personnel can easily update storage technology and scale storage capacity while considering only performance and value – not the constraints of proprietary technologies. Medical IT professionals must be diligent in researching providers, because some vendors who claim to have VNA solutions still use a proprietary archive, which means they are not really vendor neutral at all. Taking the steps to assure that a system under consideration is truly 100% vendor neutral means that a medical IT professional’s job will be much easier when it comes time to upgrade or add capacity.

Virtualization removes the need to deploy specific instances of hardware and software, instead creating virtual machines within servers. The virtual machine can be equipped with the software and resources (applications, memory, processing power, etc.) necessary for the intended task, and when no longer needed, the virtual machine can be deleted and the resources it consumed are returned to the resource pool in the server. This is incredibly more efficient and versatile than purchasing and deploying individual machines and installing software on them. Virtualization enables a doctor or technician to move from location to location within an enterprise, log on to a thin client, and have the same resources, GUI, data, and other tools necessary without having to carry a laptop or other hardware. It is difficult to make a case against virtualization on the compute side of the equation. 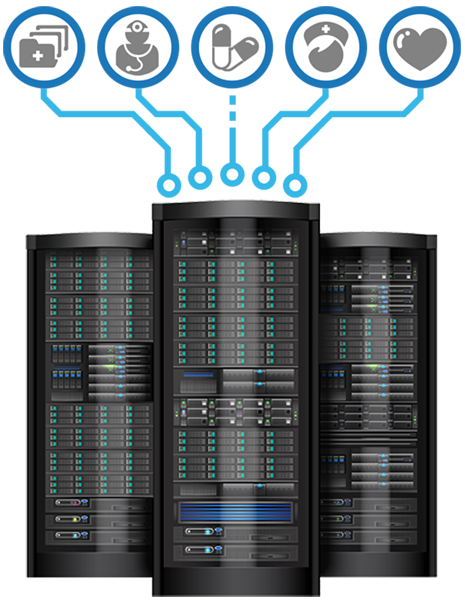 With regards to storage, there are choices. If there is one hard and fast rule for evaluating IT solutions of any type it is this: Choose the system, hardware, and software for the job, for the specific application, and for the specific organization. This white paper will look at two storage strategies, hyperconverged storage and storage as an appliance.

Hyperconvergence integrates compute, storage, and virtualization resources, and manages them with a software appliance. Hyperconvergence enables IT professionals to do considerably more while using fewer resources. Less hardware is required, and by simplifying software and hardware management, less of the IT department’s valuable time is required. It provides more availability, more resiliency, and better disaster recovery, all with less IT labor and hardware expenditures. When more hardware resources are necessary, new nodes are simply added to the cluster. It is important to note that when a node is added, it must be identical to existing nodes. Technology advances rapidly, and often within a short period of time (1-3 years) installed nodes may be obsolete, making the addition of an identical node difficult or impossible. Once the initial deployment is completed, operations can be handled remotely. When a new node is required, all that is necessary is the installation of the hardware, cabling, and power – configuration can be done by remote IT personnel.

Hyperconverged systems balance the computing and storage load among the installed nodes. A side benefit of this balancing act is increased availability. If a node fails, the load is redistributed among the functioning nodes. This has important differences from traditional methods of fault tolerance. Before hyperconvergence, for a server to be fault tolerant, it generally required a second server mirroring the operations of the first. If the first failed, the second server would take over. With hyperconvergence, no duplication of hardware or software is required. When a failure occurs, the failed machine’s load is redistributed to the functioning machines.

Hyperconverged storage is relatively resilient and reliable. Storage is distributed among the nodes. In a traditional system with a NAS or SAN using RAID, disk failure necessitates that IT personnel replace the disk as quickly as possible, because the system was not only vulnerable, but often was operating in a degraded mode as a result of the disk failure. Some RAID levels can tolerate two disk failures, but an additional disk failure means that data will be lost. With Hyperconverged systems, a failed disk is not such an urgent situation; the hypervisor in charge of storage simply redistributes storage to other functioning resources.

Hyperconverged systems are relatively efficient. Rather than deploying a dedicated server supporting a department or function, a server that often is over provisioned and under utilized, a hyperconverged approach takes existing resources and utilizes them more fully. Instead of deploying multiple instances of individual servers and storage supporting individual departments or applications, a hyperconverged approach employs a cluster of servers to support the enterprise, and they are usually fewer and more completely utilized than in traditional systems. But, hyperconverged systems utilize the compute power of the server for storage. With dedicated storage appliances, storage computation is off-loaded to the appliance, freeing the server to devote more computing power to applications. Hyperconverged systems usually provide an increase in performance at the end user level as well. Some medical centers have observed as much as a 30% improvement, resulting in a time savings of up to 45 minutes a day – a considerable productivity boost for busy physicians, technicians, and other consumers of a radiology center’s data.

Storage as an Appliance

Storage as an Appliance 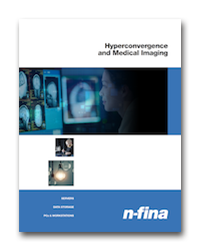