How Important is an Uninterruptible Power Supply?

How to Select the Proper UPS for your Equipment

UPS SAFEGUARDS FOR YOUR INFRASTRUCTURE

When purchasing a new server or PC from Nfina Technologies, it is imperative that the system be protected using an uninterruptible power supply (UPS). Using a UPS allows you to have the highest level of safety for your hardware and data. There are many factors which must be taken into consideration when selecting the proper UPS for your equipment, and this paper aims at providing the guidance needed to make the proper selection.

When it comes to choosing a UPS to protect your equipment, it is very important to understand that not all UPS systems take the same approach to providing power to your equipment. The manner in which a UPS keeps equipment powered varies depending on the topology of the UPS system. The following sections will allow you to understand the different UPS topologies that are available so you can make an educated choice when purchasing a UPS.

A standby UPS is most commonly found attached to consumer desktops. This type of UPS is made up of a transfer switch which allows the UPS to move from normal power operation to battery if the primary source of power were to fail or move outside of a specified range. This simple design allows the UPS to be smaller and more cost efficient than other UPS topologies, but it also results in the equipment having too frequently switch to battery on either a failure, surge, or sag. Since a standby UPS allows power to flow directly from an electrical outlet into equipment without any regulation, the power supplied to the equipment is not perfectly reliable and could possibly cause damage over time. A standby UPS is not supported on any server purchased from Nfina.

When it comes to the power signal your UPS outputs to your equipment, there are a couple of different waveforms that may show up at your server’s power supply. These waveforms will be discussed further in the sections below.

Sine wave, pure sine wave, and true sine wave (Figure 1) are all terms that refer to the type of signal you want to deliver to your IT equipment and Nfina servers. This type of power signal provides a smoother and cleaner signal to your servers which in turn improves performance and efficiency. All online and line-interactive UPS systems provide a pure sine wave output.

Also known as a modified sine wave or modified square wave (Figure 1), these types of signals are a stepped approximation of a sine wave. UPS which produce this type of power signal are typically cheaper than their pure sine wave counterparts, but they also sacrifice power quality and efficiency in the process. While this type of signal may work for most equipment, it is not recommended on servers or any other equipment which is sensitive to irregular power signals. This signal is typically produced by a standby UPS system when they transfer their output to battery. 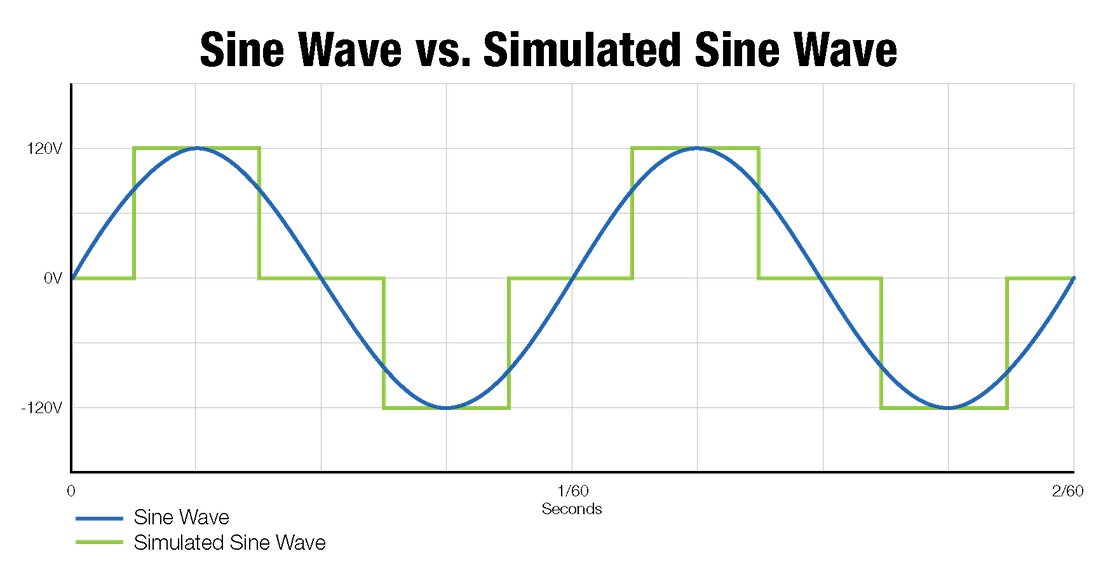 Nfina servers with redundant power supplies are configured with two power supplies large enough to handle the load of the server without the other PSU supplying any power. This is referred to as a 1+1 redundant power configuration in which one of the PSU’s is supplying system power and the other PSU is in standby mode in case of PSU failure. There are LED’s on the PSU’s which will let you know the state of the PSU according to the chart below.

It is important to examine the receptacles on the UPS before connecting power to your equipment. Many UPS systems use both receptacles that are backed by battery and receptacles that only provide surge protection within the same UPS. These are typically designated as “Critical Load” and “Non-Critical Load” on the UPS. Some UPS may even have so called “ECO” outlets which automatically power off unused outlets. Refer to your UPS manual to determine which ports are backed by battery and which are not if you are unsure. Servers and desktops which require a graceful shutdown must be plugged into the critical load outlets. It is very important that power cables on this type of equipment not be plugged into ECO ports on your UPS! This allows the protected unit to remain powered on long enough to receive the shutdown signal from the UPS as well as prevents issues with system fans caused by frequent power loss by the PSU.

Simply plugging your server into a battery backed outlet of the UPS is not enough to protect your equipment and data. Most UPS systems will only be able to hold your systems up for 30 minutes or less. In the event of an extended outage, a signal needs to be sent to your server to automatically shut down the system. Failure to shutdown your system gracefully can result in damage to components within your system as well as corruption of your data and voiding the warranty. There is a simple way to guarantee you do not lose your data due to abrupt power loss: configure your system for a graceful shutdown. This can be handled by sending the shutdown signal by a serial, USB, or network connection to the UPS. Figure 2 demonstrates a typical USB connection from a USB to a protected server. The USB cable is only connected to one of the servers and this will be the “master” node. Any other server which is connected to this UPS will receive its shutdown signal from the master node.

Figure 2 – Master agent communicates with slave agents over the network.

It is important to note that the UPS vendor’s software must be installed in order for the master server to communicate with the UPS. Simply making the connection without installing the software is the same as not making the connection at all. For example, if using APC UPS systems, you would need to install PowerChute Business edition or PowerChute Network Shutdown depending on which signaling method you chose to connect your equipment and the UPS. The vendors software must also be installed on the slave servers so they can receive the shutdown signal from the master.

Most server equipment will be configured with dual power supplies. When powering two power supplies from the same system, it is important that both PSU’s are plugged into critical load outlets. If one PSU is plugged into a critical load and the other is plugged into a non-critical load outlet, undesirable results may occur during a power event. Having multiple PSU’s plugged in will protect your equipment against a PSU failure, but now the question becomes should the PSU’s be connected to a single UPS or should the PSU’s each be connected to their own UPS? In reality, both will work, but it is important to understand when one method will fail while the other will keep your systems running without downtime. In a single UPS configuration, if your UPS fails or the building circuit which is supplying the UPS fails, then your equipment will lose power as soon as the battery is drained. However, in a redundant UPS configuration, the equipment can withstand both a UPS failure and a building circuit failure if the UPS systems are connected to different circuits. In this redundant configuration, the UPS and the software for the UPS must support the redundant configuration in order to correctly handle the proper shutdown of the systems. If you have your server connected to two different UPS systems but only have communication coming from one UPS, then the redundancy will not work properly. In this situation, if the single UPS goes to low battery, it will shut the servers down regardless of the state of the other UPS. In the case of the redundant UPS with the correct management software which recognizes the two UPS systems are in a redundant configuration, the software will not shutdown the system due to a low battery event on only one of the two UPS systems (Figure 3). The management software needs to be able to join the two UPS together as one, else the extra UPS wasn’t worth the money. Typically, these redundant UPS systems will need the ability to communicate via a network card.

Figure 3 – Agent must be intelligent enough to know that two UPS systems are in use.

Failure to properly connect both PSU’s to a UPS system can result in both PSU fan and system fans behaving erratically and running loudly. An incompatible UPS can also cause the system or PSU fans to run loudly. Online UPS systems always have the best chance for compatibility with Nfina servers and should be used to guarantee compatibility.

Nfina Technologies preferred UPS vendor is American Power Conversion (APC). If you are sourcing a UPS for a Jovian based storage system, APC or Eaton UPS must be used in order to ensure a graceful shutdown. While many other UPS will work, it is imperative that the specifications mentioned in this paper are met to ensure compatibility with Nfina servers and storage systems.

In this paper we have provided the necessary information for you connect your Nfina equipment to a proper UPS system. In summary:

Following these three easy rules will ensure the safety of your equipment as well as prevent and issues that may arise from improper configuration of your UPS system. 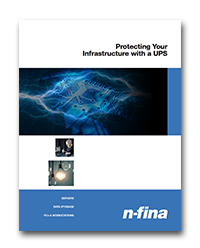